The Battle To Save Frankfurt 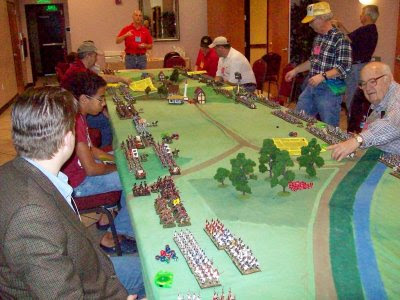 MC1: The beginning! The left side was controlled by The Imperium (Austria), Gallia (France) and Loyal Allies! Players from left bottom clockwise are Paul (properly attired in a jacket), young Brad age 13 who swept all before him in two BAR games, Giles, Ed (red shirt), Clay, Chris, Jim (Col. Campbell) and Paul. The empty spot between Brad and Giles is where I (Bill/Chevert) was posted.

Set-up commenced between 8-10am and I think we were underway at 10am. Many many thanks to Ed and his friends for getting the game set up and troops posted. Amazing agility and attention to detail. He also kept the game going with speedy efficiency.

Fortunately, Ed and Chris had played BAR previously and others (Jim in particular) had read the rules in depth. Also fortunately we had a great group of savvy historical miniatures players and by Turn 3 most people were moving units and conducting combat all on their own. BAR is an easy game to play. 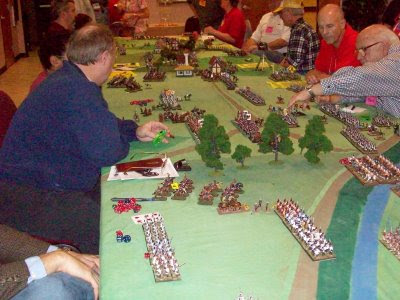 MC2: The game has moved along nicely. There are probably 2,000 soldiers deployed. Most cavalry regiments were two squadrons strong at 24 miniatures total. Infantry battalions were normally 48 strong though there were a few larger up to 60 and even 66. Some infantry was based on 3/4" x 3/4" individual bases while others were based on 1"x1" individual bases. There were also some multiples on bases. No problem. 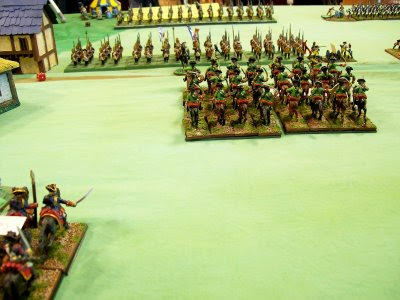 MC3: The following sequence of photos is where Jim and I slogged things out in game #1. I had roughly 120 medium cavalry and Jim had 96 infantry. We both won some and lost some and Jim's blue coats were stalwart opponents and darn tough! I found myself in the same situation as Contades at Minden. I had only cavalry to oppose a strong and competently led infantry force. Well! There was nothing to do except charge and that is what Jim and I experienced in game #1. I charged, charged and charged till the cows jumped over the moon. Follow the next pictures sequentially to get some sense of it. 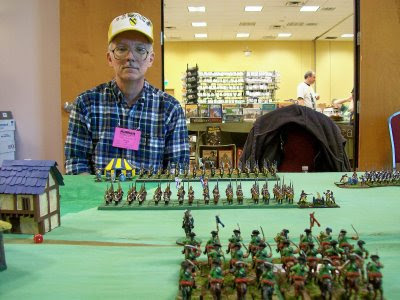 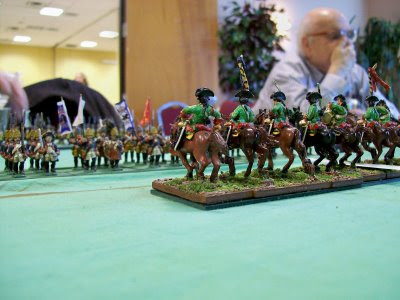 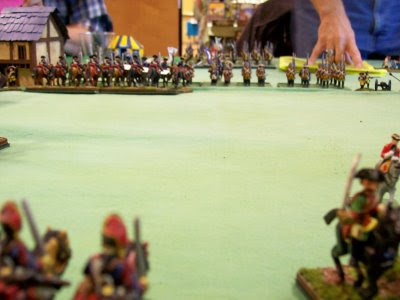 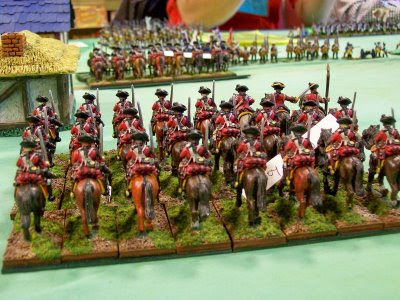 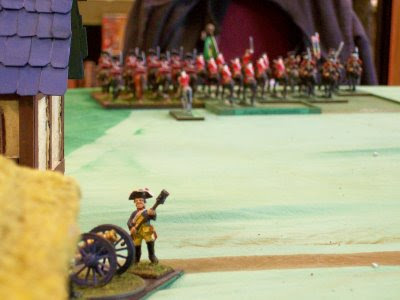 MC8: It's just before 2pm when game #1 ended. Jim and I are at the edge of the table. We were both reduced to a very low number of soldiers. It was a good and friendly combat. Let's do this again!

A most enjoyable report!

fantastic photos and report. I hope to attend such an event some day.

WONDERFUL and such a great addition to the storylines developing here at EvE!

Reich Duke Wilhelm is pleased that such great battles are so well documnted. Well done!

If I might at an observation . . . I've always found that group games (like this) are less stressful than individual (i.e., one-on-one) games.

It isn't that we try any less intensely to win . . . but there isn't the sense of individual responsibility if we lose. They get to be very friendly games . . . with more appreciation of everyone on both sides.

"Bravo" to all participants!

And it was a very friendly and non-stressful game, thanks to the superb gamemastering by Ed Youngstrom and Bill Protz. I am very glad I was able to make the drive from Mississippi to Texas for this game. There will be additional pictures posted on Col Campbell's blog later today.

Thanks for the superb report- I wish I could have been there...
Alan

As to whether or not Frankfurt has been saved, Der Erbprinz might beg to differ. :)

Beautiful.
And Col. Campbell is much thinner than I'd imagined ... I guess not all of us are over-aged, obese, etcetras ....
Especially that kid!
A