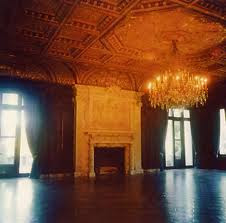 Well, the ballroom has been scrubbed and polished, the cooks are busily laying in more food of one description or another, and the musicans are warmed up and ready to go (just as soon as they can determine if this royal IOU is good for anything). His Majesty de St. Maurice would like to take this time to wish all of you in this realm of imagi-nations, and your vassels of course, a Happy New Year.
Posted by justMike at 12:43 PM No comments:

Help sought and greetings too...

many thanks and Happy New Year 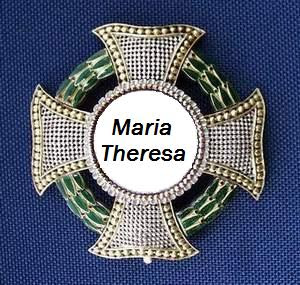 In recognition of the great sacrifice of Queen Elisenda of Hesperia and Arborea in support of the Empress' campaign in Sicily, Empress Maria Theresa has invested Queen Elisenda into the Military Order of Maria Theresa.
Posted by Capt Bill at 2:56 AM 1 comment: Ruritania is a small kingdom....

Thought this might be interesting for Imagi-Nation builders. I was re-reading "Prisoner of Zenda" and in the Introduction to the edition I was reading was a quote from a Raymond Wallace, who called such novels of small imaginary kingdoms "Cardboad Kingdom" novels, and had 7 rules for these stories:

1. The Fictitious Country - small, and preferably a Monarchy
2. The Crown (or Government) is threatened....
3. The Wicked Uncle - there must be a Villain who is an uncle, half brother, nephew, regent etc
4. The Intervening Stranger - a foreigner, typically British or American (typically from the author's home country).
5. The Remarkable Coincidence
6. The Chase
7. The Duel

To which I would add

He notes that the form of the story typically has more to do with the culture, values and ideologies of the author, however.
Posted by freecloud at 1:13 PM 2 comments:

SALUTATIONS!
King Phillip I of The Holy Mormoan Kingdom of New Wales extends an invitation to inspect the troops who have returned from the Royal Quartermasters Store in their new uniforms.
Details of the new kit can be seen here
Posted by trailape at 2:39 AM 1 comment:

A Galatan out-of-time musing, 2nd half of Century

In her latest years of fortunate reign as Princess of Galatea and Queen of Hesperia & Arborea, Lady Elisenda Folc de Cardona had to face an unexpected internal crisis, after Empress Maria-Theresa formally requested assistance of the Galatan Confederation to an Imperial punishing expedition against the newly born Kingdom of Sicily, lead by Reich Duke von Beerstein. Summoned to a joint session for debating Her Imperial Majesty's request, a number of Confederate Parliaments rejected at first drawing any troops of their own for an allegedly agressive campaign; so that only after a long debate and heavy negotiations, a Galatan Expeditionary Brigade was finally agreed for muster. 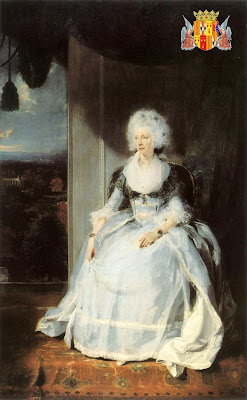 Queen Elisenda proudly responded to the Empress in affirmative sense, but in her deep inside she understood to have this time demanded too much to the Imagi-Nation whose survival she had been devoting her entire life to. She knew her Parliaments patience had been exhausted and a change of sovereign would be soon demanded -someone young, plenty of new ideas and hopes. Her time was coming to an end, so that she silently started preparing her own succession.
More info at what-if-catalonia.blogspot.com/2010/12/expeditionary-brigade.html
.
[Galatea, Hesperia and Arborea are my fictional names for Catalonia, Valencia and Sardinia respectively.]
Posted by Soldadets at 2:23 AM 4 comments:

Happy St Stephens Day one and all! I wonder if I can draw upon the creative brain that is EvE - I am looking for manufacturers of 18th century civilians and character figures. All suggestions gratefully received...
many thanks
Alan
Posted by tradgardmastare at 2:01 AM 5 comments:

I founded the "Emperor vs Elector" group blog over three and a half years ago. And on this Christmas Day, 2010, we now have 84* member authors *(note, now 85 authors) and have had almost 1,400 posts (and innumerable comments). 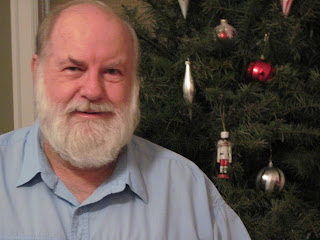 Unfortunately I never instituted a counter, so there is no knowing how many visitors we've had . . . but it must be a very large number.

I thought that you might want a look at the mad fellow (me) who started all of this . . . so click on the photo for a better look (if you want).

Anyway, please allow me to wish you all a most sincere and heartfelt "Merry Christmas"; and a "Happy, Healthy and Prosperous New Year" . . . and may the coming year be filled with many thrilling moments on the table top. 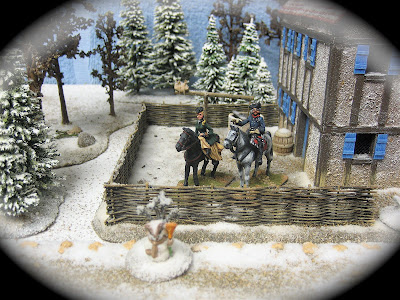 The Erbprinz Friedrich of Hesse Seewald and the Prinzesin Katherine extend their warmest greetings to all denizens of the Electorate and wish everyone a Merry Christmas and a Happy New Year in 1761.
Posted by Der Alte Fritz at 9:20 PM 4 comments: 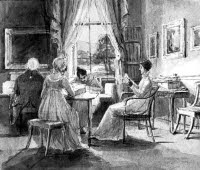 I thought it might be an idea ( inspite of the vile delivery situation here in Scotland) to correspond with fellow EvE members on paper. I mentioned it before but cannot find the details or those interested . I fear it might be an excuse to use my 18th century Writing slope I got for my half century birthday this year. If any of you are of the same mind do let me know ...
Posted by tradgardmastare at 1:25 PM 2 comments: 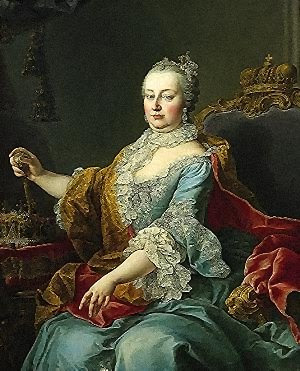 Empress Maria Theresa has summoned the Marquis of Vilana to Schonbrunn Palace to seek military assistance from the Defiant Principality of Galatan/Catalan for her campaign in Sicily. News from the island is not good. The Reich Duke of Beerstein was repulsed with heavy casualties in his first encounter with King Joseph. Reinforcements of an infantry brigade could stabilize the situation. As the Empress is bogged down with the Turks, she is unable to sent any Austrian troops. The Marquis of Vilana may be her only hope!
Posted by Capt Bill at 12:19 PM 4 comments: 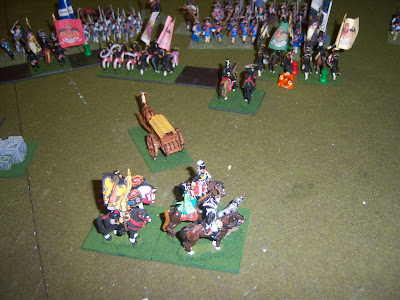 Reich Duke Wilhelm von Beerstein was order by the Empress to begin an offensive against the Kingdom of Sicily. Despite a brilliant amphibious landing, the Beerstein force was repulsed in its first encounter with the Kingdom of Sicily. King Joseph's splendid army crushed the Beerstein right flank and forced the Reich Duke to withdraw under cover of darkness. Battle accounts will be posted on both site with the best possible spin on the affair...

Major General Manly-Barton has recently led the lead elements of the Britannian 5th Regiment of Foot to join the Britanno-Germanian forces assembling in the Margraviate of Carpania. 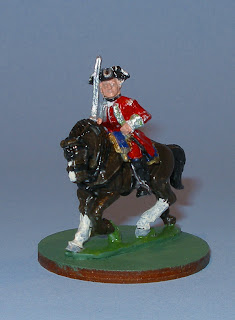 The King and Queen of Brussia 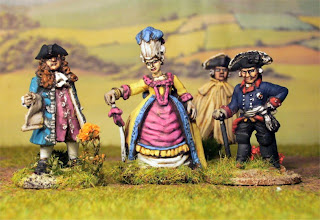 His Emminence The Elector Spiritual,

His Emminence The Elector Spiritual, The Prince-Archbishop of Witzboldfeld, Johan-Louis von Christofberg, Primate of all the German People of the Reich, and some of the habitues  of, and visitors to, his most colourful of courts, seen at the ceremonial consecration of the new colours of the Elector's Guard Grenadiers, so sadly and recently lost at the Battle of Grosser Feuerbach. 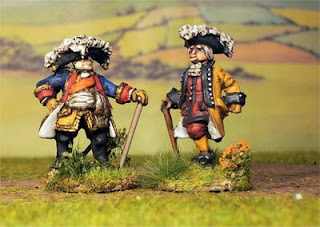 more to be seen at
http://cardinalhawkwood.blogspot.com/2010/12/general-stahl-undefeated.html
Posted by kendo at 11:33 PM 2 comments:

News have started arriving from the battle recently held at the Galatan/Catalan town of Ponts, half-way between Balaguer city and Cardona fortress. According to my Imagi-Nation's chronology, the battle has been fought on 17th August 1713. On that day, a Two Crowns column lead by General Bracamonte consisting of 4 French, Spanish and Swiss Infantry battalions, 2 Dragoons regiments, 1 Mountain Fusiliers battalion and a field battery met on the Segre River bed the army of Marquis de Poal; who was in command of 2 Catalan Infantry battalions, 1 Dragoons regiment, 1 Sometent peasant militia and 2 batteries (heavy & light).

The 'real' battle was gamed at home last wednesday with 15mm miniatures on a reduced size board (120 x 90 cm), following Close Fire & European Order (CFEO), and it was a quite funny experience. So far, I've only had time to post a narrative chronicle of the event, protagonized by a courier and General Manuel Desvalls, commander of Cardona fortress and brother to Marquis de Poal. As soon as I know how to upload pictures from my dam...d mobile phone to my PC, a new gaming chronicle will be posted.

If curious about the battle narration, you can read a first report here: what-if-catalonia.blogspot.com/2010/12/news-from-battlefield.html
Posted by Soldadets at 6:45 AM 1 comment: 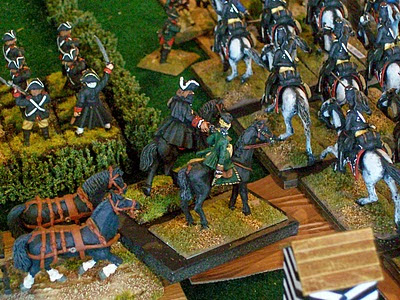 Who IS that unknown calm woman and her masked desperado associate? Shudder! They ruined the party near Frankfurt Am Main at l'Maison Freyegoumont.
--- 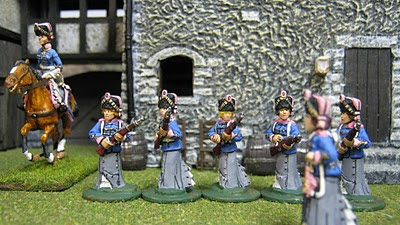 Two spectacular reports of recent battles in the New World, one in the Northern Colonies, the other in the Caribbean.


Those curious about the good Baron Munchausen's improvements on the war engines depicted in the Da Vinci Code and the experimental weapons designed by that young Colonial Benjamin Franklin to use the power of the thunderflash of lightning, should subscribe to that Gazette entitled 'Gaslightrules Group' (it's free) to peruse and enjoy the two portfolios of fascinating and inspirational illustrations entitled 'Age of Reason' and 'Ben Franklin's War'.

At last, those interested in the esotericism and the supernatural would enjoy the well illustrated report of an adventure filled with weird encounters that took place in far away Pangaea.
Posted by abdul666 at 3:47 AM 2 comments:

General Stahl, the Undefeated ... a WIP 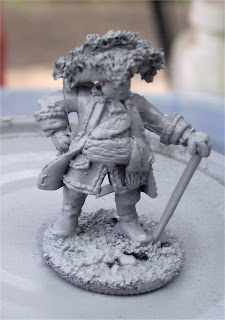 Frankfurt Am Main has been a Gallian magazine since 1755 (2005) under the control of l'Intendant, l'Comte de Bastille. Occasionally there have been festive occasions hosted by Der Hurtzhog Artur von Frankzonia. In anticipation of another, our familiar Lady Diana Pettygree and friends have arrived again - as - the winter - approaches. 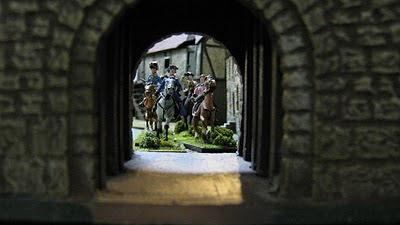 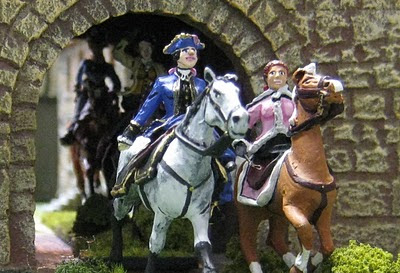 Lady Diana Pettygree (blue), her particular friend Lady Cherish Masquerade (pink),  Maid Katherine and last Lady Belle Silhouette (busby) pass through the gate into the cheerful bright sunshine. What a life!
----------
All this in anticipation of our annual Light Troop Game scheduled for 4 December 2010. The plan is to take many photos. Some of you will have seen the entourage bringing up the rear of The Legion de Fischer on The Campaigns In Germania Blog recently. See: http://campaignsingermania.blogspot.com/2010/11/bridging-main-river.html
Comments welcome as usual.
----------
Respectfully,
Bill
Posted by Gallia at 10:10 PM 2 comments:

A Convoy in the Balearic Sea A scouting English xebec has reported a small convoy sailing off from Barcelona harbour, apparently heading to Majorca island. The convoy consisted of two Catalan/Galatan war brigantines (one of which flying a privateer flag) which were apparently escorting a civilian lesser ships fleet, along with a medium sized armed frigate flying Maltese flag. No aggressive manoeuvre has been detected after mutual spotting, so that the xebec has judged it appropriate to exchange an ensign salute with them and keep on her own track.

More info at what-if-catalonia.blogspot.com/2010/12/convoy.html.
Posted by Soldadets at 3:21 PM 2 comments:

Following a discussion on the TMP 18th Century page, I asked Eureka Miniatures about the possibility of adding some people doing the Minuet to their 18th Century figures, this is the response:


Posted by freecloud at 5:10 AM No comments: