To continue the 'Seben Year Warz" that I started last year, now another move across the board. 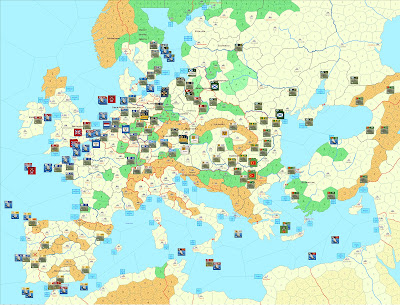 The Russians have broken out across the rivers into Mieczyslaw and have sent a raid into the Duchy of the North. The raid is at odds of 2:1, with the intent and orders to destroy or damage military naval vessels in the port of Stockholm. The Russians want to have local naval supremacy in the Baltic before winter sets in. 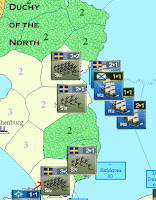 Further to the south in central Uropa Saxe-Bearstein has been overrun by the Altmoranian forces. Now Wein comes within the grasp of King Billiam of Brandenburg. The Austrians have massed forces to cover the capitol and maintain a flank force to press across the Danube should the Altmoranians take action against the fortifications. More forces are being pulled back from the Dobrudshiva borders across the Hungarian plains. Will the Brandenburgers be able to take Wein before winter proper sets in?

Stagonia, having torn off their mask and fully supported Prussian aggression into Saxe-Bearstein, is now facing a pressure force from Gallia, these Frenchies mean business and the Stagoians only have some hastily raised militia and 4th drill battalions to defend the royal holdings. While the army has settled into the mountains including Tipplebruder in their supply lines. While not the center of operations the town of Tipplebruder is facing a stripping of local supplies to feed the Stagonian forces preparing to support Prussian advances on Wein. In the Atlantic, Spanish and French fleets have re-deployed, to support a Spanish blockade of Gran Bretan fleet in Gibraltar. This has pulled many Britannia ships from patrols and released pirate activity in the Mediterranean. All communications with Alexandria and Cairo in Egypt have been cut off. I have no naval game assets, so if there are EvE active members that would like to do the 2:1 odds Naval Raid at Stockholm - again this is a raid and the aim of the Russians is to sink, burn or damage as many Swedish ships as possible. Not a landing of troops. For those with skirmish forces, or an interest in doing a mountain raiding party sort of game (or games) then Tipplebruder militia could be active in messing with the Stagonian supply lines during autumn and early winter in the mountains around Tipplebruder. (Maybe a new storyline?)
Posted by MurdocK at 10:20 PM 6 comments:

A show of hands update

Further to my enquiry as to setting up some form of 18th C rules discussion and sharing platform.  I feel, coupled with my display of interest posting on TMP, that there is enough people taking an interest in the subject to start seeking out free wiki service providers and taking a crash course in wiki admin. In fact if the number of people who have in house rules and rules amendments, that they are willing to share and discuss, is anything to go by it may be quite a useful resource

I know that some may find using a wiki a daunting proposition after using public forums for such a long time but, as Jones is fond of saying, "don't panic!"  It is terribly easy, just like using email software and is ideal for generating and sharing ideas, team projects and documenting your suggestions via comments.

I propose a system whereby contributors apply (to control spamming and nuisance elements) for a "user position" this then allows you to contribute and author documents and upload files. Viewing and commenting is open to all just as it is in a public forum. Thanks to Lentulus for his suggestions.

To give me an out *grin* do not take the above as gospel, some points may change dependent on the wiki, and service provider. Anyone who has prior experience in setting up or operating a wiki is encouraged to offer suggestions, please.

Posted by Unknown at 7:08 PM No comments:

I leave for hospital in about a half hour, so Murdock of MurdocK's MarauderS and the Duchy of Mieczyslaw  will be acting as our blog owner for the next couple of weeks or so.

If you have any issues, please contact him at via email at murdock@axion.net and he will endeavor to aid you.  So until I return, enjoy the Eighteenth Century of our Imagi-Nations.

Show of hands if I may

I would like to ask, if I may, for a show of hands if you are using older rule systems dating from the era of Featherstone, Grant, Young etc. for your iNation games and/or 18th century war gaming?

I suspect from my recent visits to many of the iNation blogs and the replies to 'the war game' posts on various fora that this may be the case. If so, I would also be interested in a show of hands as to how many of you play them as written or have developed in house amendments or additional rule sections.

Reason? Would those that answered be interested in a wiki to share their experiences with rules writing and amending with an emphasis on early to mid 18th century warfare with the option of visual demo's or AAR's

In this day of "old school rules" becoming increasingly popular and somewhat "new school", the release of revamped Grant and Featherstone rules I'm thinking it might be of interest to the enthusiast.  What is your opinion?

Great news that Jeff is posting again, if in limited form, huzzah!
Posted by Unknown at 4:33 AM 12 comments:

The Duke is down!

Please take the link below-
http://tradgardland.blogspot.co.uk for some dramatic news regarding Karl Frederick Duke of Tradgardland in the Battle of Drei Hugel in the disputed Valley...
Posted by tradgardmastare at 4:43 AM No comments:

As some of you know, I am facing major surgery later this month followed by an extensive hospital stay and recovery period. Thus I will not be able to respond to any requests to join EvE or any problems that might pop up.

Therefor I have asked Murdock of MurdocK's MarauderS and the Duchy of Mieczyslaw to assume the "blog ownership" while I am unavailable.

This group blog grew out of a conversation that we had some years back and he lives within an hour's drive and will know how I'm doing . . . so he was the logical choice to assume the reins. You may contact him via email at murdock@axion.net

Hi,
I've just posted some pics of the first set of greens of the Highlanders Richard Ansell is sculpting for me.
Pop over onto the Scotia Albion blog and have a look and let me know what you think.
one pic as a teaser;- 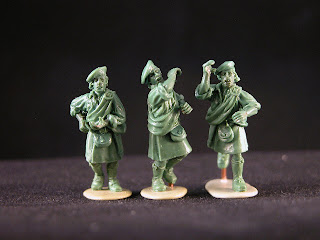