The Great Blue Bear now on his way to the summerlands.

Emperor vs Elector readers, one of the originators of this group blog, Jeff aka Blue Bear of Saxe-Bearstein has passed away.

Jeff had been in hospital since July and moved to Hospice care in late September.

On October 13, 2016 there was a celebration of life for Jeff and we all recounted many tales from the past 20 years.

Saxe-Bearstein shall be going silent as was Jeff's desire.  There is no reason to stop posting here and continuing a game-filled conversation.
Posted by MurdocK at 4:29 PM 18 comments:

Regiment Bauer Bar ,in Tradgardland  service, on parade in the forests of the Duchy of Tradgardland. 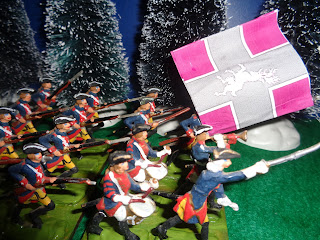 Rest in Peace Jeff and thanks for everything.
Posted by tradgardmastare at 5:25 AM 1 comment:

Does anyone know if the range of tribesmen and Russian fur traders are still available?
Thanks
Alan
Posted by tradgardmastare at 12:37 AM 1 comment:

Some hopefully refreshing pictures of my first ever serious painted sailships:

If curious to see some pictures else, please click on the caption above.

Finally after years of painting (and not playing enough), my friend Rob and I have begun a series of early 18th century battles between the vile Stagonians (Rob) and those much-beloved Saxe-Bearstein troops (me).

We are trying out the "Black Powder" rules (and making mistakes of course).  So far we have fought two battles:

The Battle at Bittewasser (clicky) and The Bridge at Kronstadt (clicky).

And a bit to my surprise, I have been liking the "Black Powder" rules . . . so we hope to fight more battles as my health permits.

Future encounters can be found at "The Wars of Stagonian Aggression" blog (so you might want to bookmark it). 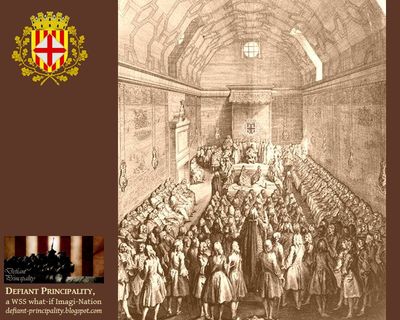 Today 6th March 1714, Princess Elisenda has just taken oath on the Defiant Principality Constitutions as customary (not without previous harsh negotiations with the Commons, as it can be read here). Chancelleries of all around Europa are invited to the Coronation Ceremony event, which is due to be held on next 21st March at Saló de Sant Jordi (=Saint George Hall) in Catalonia's Generality Palace.

How to downsize an already small army, and other musings

Sure that I would reveal no secret if I stated that Gibraltar was taken in 1704 by an Anglo-Dutch fleet on behalf of Archduke Charles Habsburg. By virtue of Utrecht Treaty (1713) it was agreed the enclave to come under British sovereignty, as most already know for sure.

OK so far. But, did you know that Gibraltar kept being ruled by an Austro-Catalan governor until 1719, when he was finally substituted? Besides, I've recently learnt that right after the rock conquest, a group of Catalan businessmen created there a West Indies trading company in 1709, that was christened as "Companyia Nova de Gibraltar" (=Gibraltar New Company).

We're going to combine and cook at will both curious stories as a starting point for an epic adventure in the Spanish Main, starred by an audacious band of Catalan settlers. Such campaign will be mostly RPG driven, with some wargaming sideshow around. If curious about this and other musings, please take a look into our blog latest entry.

While revamping that blog illustrations and broken links, I've taken advantage for posting a couple of early 18th century flag plates else. This time, some of the Holy Roman Empire states. Please enjoy them at will, if wished:

You can watch and download them from this particular page.

Hi, just a short note to acknowledge to anyone eventually interested that, while in the process of refurbishing The Defiant Principality blog, I'm taking advantage for restoring some flags and uniforms plates hosted there that went missing --whatever the reason why. Well, not just restoring them but rebuilding these at some extent. Besides of those plates directly related to the Principality itself, I have now online again a couple of plates else: for the Kingdom of France theone, and for the Kingdom of Spain the other. Just click on each to see it larger, if curious.

Plates themselves are a bit crude if compared to those professionally printed that can be found in market, but perhaps their uncommon subjects (land and state flags, as well as maritime ensigns) may be useful to someone. In any case, I'm getting a lot of fun at drawing them!

The whole flags collection will be posted on this particular page of my blog: what-if-catalonia.blogspot.com/p/flags.html

A battle to help explain a peace

As announced a few days ago, I've already started to explain how The Defiant Principality manages to survive the War of Spanish Succession. A much needed piece of information on how and why it happens is the critical battle of El Bruc, fought between 8 and 14 December 1713 in a key pass in the route toward Barcelona City.

Well, we gamed it three years ago (some weeks before our will to keep gaming faded away) and was still pending an AAR. Now that we've happily agreed to resume the story, it becomes compulsory to tell what happened there, and how it affects our currently projected setting.

Wish you enjoy it, despite my poor English! what-if-catalonia.blogspot.com/2016/04/post-war-1-decisive-battle.html

The Defiant Principality is going to ride again. Yes, I know --that's right what I said two years ago. "Let's re-take the story", I said. Sadly it didn't happen, due to incidences and problems in our lives –-such kind of random events no one expects.

However, now I'm confident enough to announce it publicly, for the original team of gamers have gathered once again and are excited to re-start the game, after some planning already done. If anyone willing to learn more, please check our latest post at The Defiant Principality blog.

Which (if any) state did you base your Imagi-Nation on?

Was wondering about how y'all decided how big/what type of troops/etc your Imagi-Nations would comprise of? Was it a consciously planned structure or did you just start painting, or a bit of both?

For what its worth mine was roughly based on the idea of providing a Reichsarmee Brigade sized force + a few cavalry, light infantry etc units for my French army, and calculating a state & population size to maintain that.  I found the state of Brunswick-Wolfenbuttel fitted the bill as a model", with a small Garde du Corps, 4 Infantry, 1 Fusilier & 1 Jager battalions, and for cavalry a Dragoon and a Hussar  regiment. (It also had the rather interesting "Voluntaire Auxiliaires" which I'm finally getting round to recruiting for myself in my own Imagi-Narrative.)

*though my Imagi-Nation only has 1 battalion per regiment, not 2 as it is 1/2 the size of Brunswick population & land wise