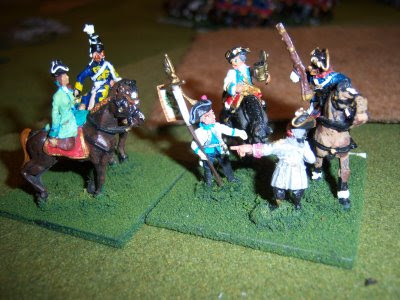 Reich Duke Wilhelm and his staff meet the Duchess and her Aide Major Dieter Debauchery to welcome foreign generals. Photos of these generals and their new commands are posted on the Reich Duchy of Beerstein blog. Enjoy! 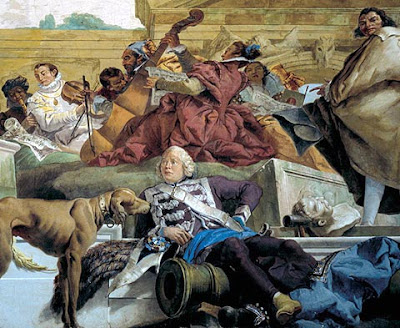 In his townhouse in the capital of the Duchy of Tradgardland, General Offizer Mackay , admires the newly finished portrait he has had commissioned. It takes pride of place in his library. He wonders how long it will be before he can enjoy it fully- he leaves for Beerstein in the next few days. Still, he ponders, he has time for one last flagon of ale and pipe of pipeweed before he gathers his staff for a briefing...
Posted by tradgardmastare at 11:36 AM 2 comments: 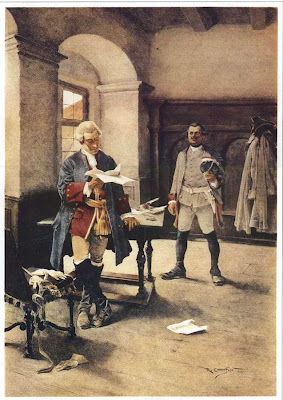 Gentlemen
An interesting link to four -handed Chess with differing armies some pertaining to the 18th century! I think it might be fun to try- let me know what you think...
http://www.chessvariants.com/multiplayer.dir/europeanchess.html
best wishes
Alan
p.s perhaps someone might like to make up armies to represent the differing characteristics of our
imaginations- go on have a go!
Posted by tradgardmastare at 10:22 AM No comments: 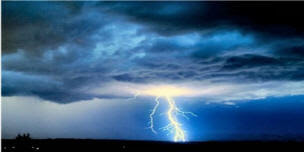 Aeneas finishes speaking and ,amidst the voices raised in exaltation, a loud crack can be heard even through metres of soil and stone. The hillside has been hit by lightening...

Small pebbles and earth start to cascade upon the men ,torches are extinguished and the rest is silence...

Posted by tradgardmastare at 4:17 AM No comments: 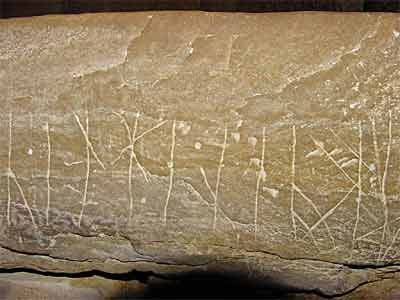 The crew of the ship "Wild strawberries" have landed upon St Kilda. They have made contact with the islanders and are engaged in matters historical.

Aeneas, along with several officers and men, have been led by an island guide into a stone lined passage dipping steeply into the bowels of the Earth.

There, illuminated by four spluttering torches, Aeneas stumbles upon runes - something he has longed to see all his life...

" So Gentlemen, these runes prove without a shadow of a doubt that our fore bearers lived upon these islands. They came by long ship from our beloved Tradgardland and settled here. In these runes we can read their names carved here for posterity. This is a great day for the Duchy . This is a day when we can add St Kilda to our island family and link these people with Duke Karl Frederick and their true homeland !" announced Aeneas ,his voice overcome with emotion. 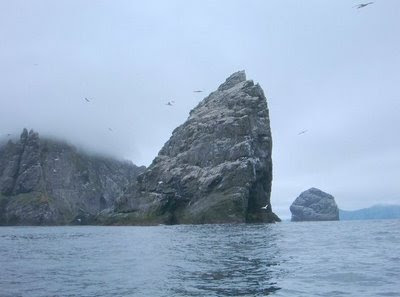 The Tradgardland Ship " Wild Strawberries" left Shetland a few days ago. On board were around 100 men - sailors,marines and natural philosophers. They included an apprentice of Vonn Bergmann -Aeneas Todsheim . Aeneas, a child prodigy ,had been educated by Vonn Bergmann and now at 18 years of age this was his first voyage of note.

The ship had left Shetland and had an uneventful sail across the 200 miles to Sula Sgeir where water was taken on board. Another day's sail brought them to the Flannan Isles where they moored in the Summer sun. They next day they had sailed through light rain and were within sight of St Kilda. They were about to reach their destination...

Posted by tradgardmastare at 1:29 AM No comments: 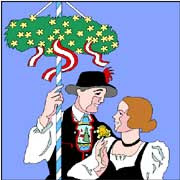 The festivities are well underway in the Duchy of Tradgardland. Duke Karl Frederick walks amongst the pavilions and celebrating crowds arm and arm with Duchess Liv. In his hand he carries another bottle of Elderflower champagne.His wound has eased enough to allow him to celebrate as he has done each Midsommer since he was a small boy. The bonfires are lit, the May Poles risen to the skies and the haunting dance music is played upon hurdy gurdies...

The Duke still wonders what will happen after the duel of recent days ,yet he is transported by the day and the joy surrounding him. With Liv , he becomes caught up in the intricate dance that weaves its way around tent and bonfire following the same invisible maze that has been followed for over a millennium...

For today the Duchy celebrates - Skogsmork becomes forgotten as Midnight comes and goes. It will be a long but joyful night for one and all...

A Good Midsommer to you all , wherever you are, from the Duchy of Tradgardland!

Posted by tradgardmastare at 12:09 PM 4 comments:

In the middle of the night... 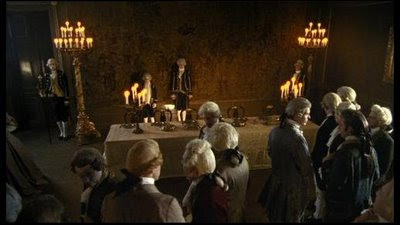 It is Midsommer nearly , in the Duchy of Skogsmork, yet all is not well. Wolfgang spends the nights talking with his closest advisers. Since the appalling slaughter of his father Otto ,at the hands of that villain Karl Frederick , Wolfgang has wondered how to proceed. At last he feels that he is nearing an ending to the beginning...
Posted by tradgardmastare at 12:15 AM 3 comments: 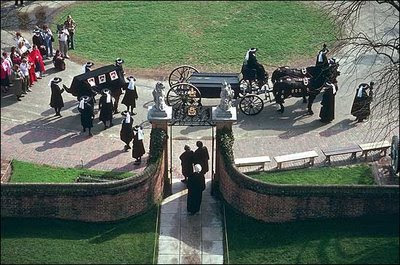 Find out who at:

Posted by tradgardmastare at 7:45 AM No comments:

Rumor out of the Landgraviate of Ober-Schweinsberg suggests that the squadron of Hesse-Engelburg ships last seen off the Shetlands has appeared suddenly on the river approaches near Bad Nachtschwein, and begun landing troops to threaten the capital of the Bad Nachtschwein League and its surrounding towns. It would appear the spring campaign season is opening....
Posted by Snickering Corpses at 3:43 PM 1 comment:

A Voyage across the Water

As the rumours of war swirl across imagi-Europa, certain letters reach courts in western Germania.

The Margrave of Carpania receives news from his cousins in Britannia that the Scottish usurper has won a great victory. Upset at the news, the Margrave decides to send representatives to give aid and succor to the Britannian Army. He directs that his nephew, Siegfried Hapnich (a major in the Carapnian Army), travel to Britannia to offer his sword to his cousin, the King of Britannia. Siegfried is elated at the opportunity and persuades his young friend, Alaistair Campbell, to accompany him. Alaistair, a nephew of the Carpania Scottish mercenary general Seamus Campbell and cousin of the current Duke of Argyll, is more than happy to help fight against the Jacobite usurpers. The two of them, with Siegfried's batman, board ship to journey across the water. 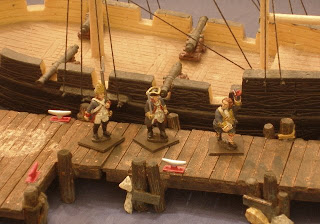 In the meantime, the Duke of Courland receives a letter from certain supporters of the True King imploring him to send a representative to the victorious Scottish forces. He looks for a volunteer and finds his nephew, Count Mikhail Pavlov, very willing to go. Mikhail and his batman also board a ship to carry them across the water. 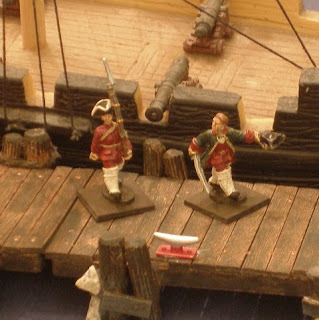 These five doughty adventurers will soon be making the journey from Mississippi to Illinois to join the respective sides in Der Alte Fritz's Jacobite campaign.

An Update on The Texas Big Battalion Game

Please feel free to visit the blog for the upcoming Texas Big Battaluion Game at MilleniumCon XI for an update.

Sir William of M'Uedail
Posted by Sir William the Aged at 7:25 AM No comments:

The Principality of Saxe-Bearstein launched a punitive attack on the homeland of the Kingdom of Stagonia. The result was a resounding success. 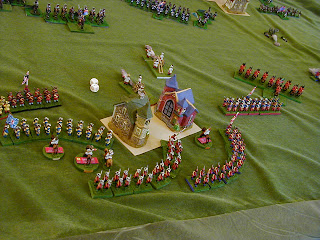 This, plus a superior artillery train were the keys to the battle in which Saxe-Bearstein was able to liberate the city of Wollmitz and a number of nearby villages.

As you enjoy the second painting of the hussars of Koenig Maurice the Vile being slaughtered by solid infantry fire, you are urged to contemplate the karma (and justice) of the result. 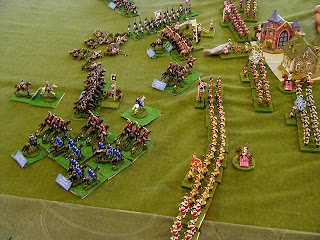 Further information will undoubtedly be available over the next week as accounts are expected to be published here and here . . . and, of course, the Vile King's hired spin doctors will surely offer false accounts of the defeat that he so richly deserves.

Der Alte Fritz has published a lovely report on his Oberon battle with Protz at
http://altefritz.blogspot.com/

Once again, it seems that Germanian forces were triumphant. (sigh)
Posted by Frankfurter at 9:26 AM No comments:

Amidst the green avenues... 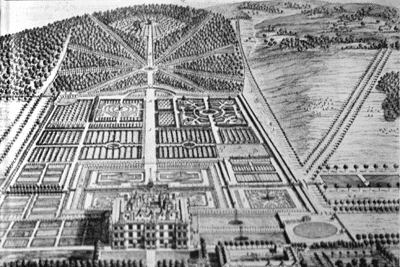 Duke Karl Frederick and Duchess Liv are taking the air along the green avenues and alleyways. The sun shines brightly upon the Duchy today. They talk of yesterday's fireworks and how Major McKay excelled himself with pyrotechnic wonderment and awe inspiring rockets illuminating the night sky. Karl Frederick remarks that Mr Handel's Music had been so beautiful and played so well by the Court orchestra...

Lost in their conversation ,their reverie is shattered by a messenger bearing a letter sealed with the Arms of Skogsmork. Reluctantly Karl Frederick opens the letter and reads it slowly and deliberately to his wife...

The letter can be read by you,Dear Reader, at the Duchy of Tradgardland Blog today

Posted by tradgardmastare at 10:34 AM No comments:

A gift and enclosed letter... 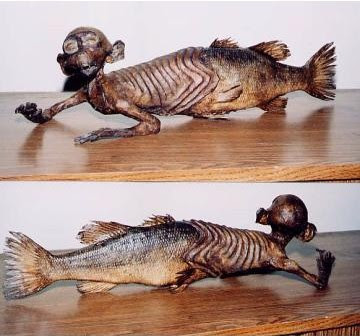 Dear Major v. Ricewits
I enclose this fascinating and beautiful mermaid for your enjoyment and delectation. We have many such objects and are willing to sell them to you .
I look forward to 500 reichsdollars by return in payment for the enclosed artifact.
Hans von Munchausen
for the Tradgardland Academy
Posted by tradgardmastare at 2:20 AM 1 comment:

One of our spice explorers has returned with samples which he claims were gathered from various strange beasts as he explored distant lands for new herbal ingredients. Some of these appear to have been the result of some strange crossbreeding experiment. These include but are not limited to the following:
Unicorns crossed with elephants;
Giant camels crossed with leopards (not the classic cameoleopard, these creatures are shy herbivores);
Giant cattle whose horns are flat and curved like sheep;
Deer who have, instead of antlers, twisted devil's horns;
Water Dragons whose bite and spittle are invariably lethal;
Birds who seem to have gems instead of feathers;
and most improbable,
People covered in fur who neither wear clothes, speak, nor light fires!

If you desire, we might be able to include some of these specimens in our next shipment of ceramics and sausages ....