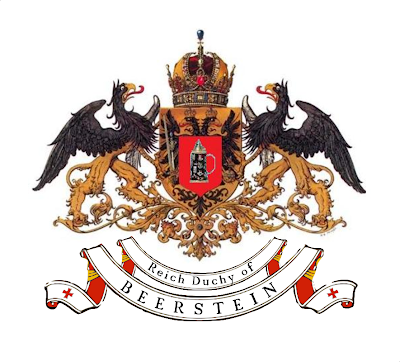 The Reich Duchy of Beerstein's College of Honors invests Commanders of Beerstein's Foreign Legion into the Order of the Goblet. These heroes can be found on Osterreich Uber Alles.
Posted by Capt Bill at 9:52 PM 1 comment: 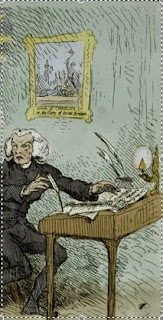 Ministers in the palace suspect Grolstein spies are afoot. King Wilhelm has been unable to post replies to comments on his previous message at the Konigreich der Bleiherzen... a troop of dragoons have been dispatched to search suspected houses in the capitol.
Posted by littlejohn at 7:37 PM 2 comments:

I suggest that you repair to the Lead Gardens for an interesting battle account. 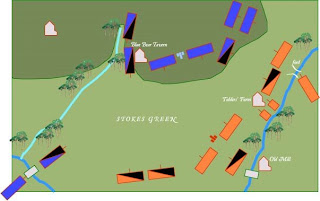 The map to the left shows the initial disposition of troops . . . and in an interesting note for all Imagi-Nationers, while the battle is inspired by a historical one, LittleJohn has chosen to name various terrain features for some of the blogs he enjoys . . . and idea which I suspect will be copied from time to time.

Take a look at Lead Gardens. (click to go to the blog). 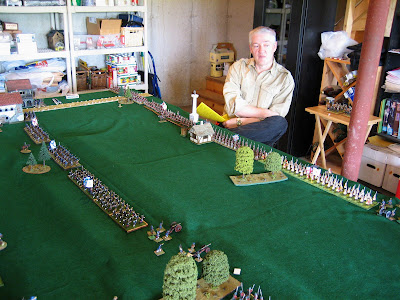 Government commander in chief, Lord Woodstock, surveys the opposition with an appropriate level of disdain. Picture from the Battle of Culwhinic on May 8, 2009.

I have posted some pictures and an after action report of the Jacobite Rebellion Battle of Culwhinic that we fought last weekend using BAR rules with modifications for the '45. Please travel to the Der Alte Fritz Journal, using the link at the right side of this page, and be sure to click on the pictures to enlarge the view.
Posted by Der Alte Fritz at 7:25 AM 1 comment: 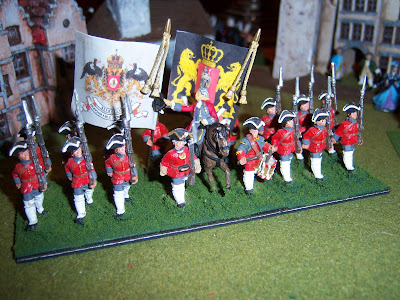 Sir David Linienblatt of Tippelbruder, Grand Master of the Order of the Goblet, named Inhaber of the Beerstein Honourable Pensioners. They are the only infantry unit to wear a red coat with gray trim. This is to reflect that each member has shed blood and grown gray in our service. Since they will be the senior battalion in the army, Sir David will serve as a Brigadier General. He will ensure each soldier is qualified regardless of which battalion nominates the candidate. Two more battalions appear on the Beerstein site. Enjoy! 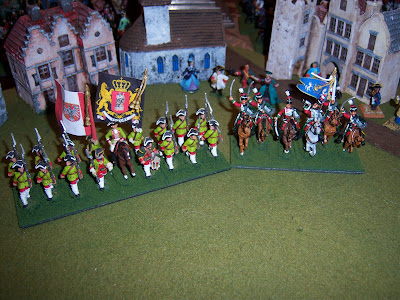 With the arrival of the Frankfurter Bad Rotten Muskytears and the Princess Haley's Hussars from the Holy Mormoan Kingdom of New Wales, the Beerstein Foreign Legion is complete. Each unit commander will be invested into the Beerstein Order of the Goblet. Paintings of the complete Foreign Legion can be seen on the Beerstein site.

Grand Tour arrives in the Grand Duchy of Hetzenberg 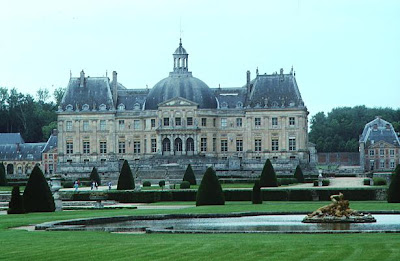 Grand Duke Karl of Hetzenberg will host a grand ball for Reich Duke Wilhelm von Beerstein, young King Basil, and their entourage. The Reich Duke hopes to meet Master and Commander Horatio Horngeblase, Ursula, and General Rauppen-Schlepper at the gala.
Posted by Capt Bill at 3:31 AM 2 comments:

As a passing piece of whimsy, has anybody considered an imaginery Middle Eastern army modelled on, say the Ottoman Turks, Persians or Moghul Indians?
Posted by David Crook at 2:19 AM 11 comments: 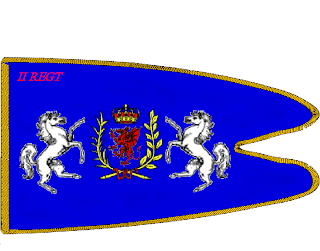 I'm please to introduce another Regiment of the Holy Mormoan Kingdom of New Wales, Princess Hayley's Hussars.
(A picture of their Guidon is here for you viewing)
Read all about them at MY BLOG!
Posted by trailape at 5:47 AM No comments: 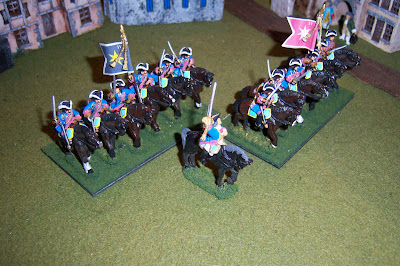 A New Letter from Scot's Land

As Der Alte Fritz ( link ) prepares for his Jacobite campaign battle tomorrow, Major General Seamus Campbell, currently in the service of the Margrave of Carpania, has received a new letter from his cousin, Alistair, on detached duty with the Britannian government forces fighting the Jacobites ( link ).
Posted by ColCampbell50 at 11:13 AM 2 comments:

When the Regiment formed in 1726, one of the drummers was a negro boy named Kane, (he was a runaway slave who had been with the Regiment's RSM since fleeing from a Virginian plantation). Whilst on a training march the Regiment stopped near a small lake and observed some Black Swans. Never having seen swans other that the white variety, one of the Soldiers commented that "...them thar geese are as black as Kane".

Drummer Kane rallied the Regiment at Cadbury Hill in 1733, when despite serious wounds stepped forward of the firing line in full view of his faltering regiment and beat the tune "STAND TOO". Suitably inspired, the regiment repulsed the enemy's charged with a devastatling volley and the bayonet, when many thought the regiment was on the verge of breaking into rout. They drove their opposite numbers from the field of battle. The Senior Drummer of the Regiment is always a Black Drummer.

Read More At My Blog!

Posted by trailape at 8:07 PM No comments:

Furst Bruno von Ursa has offered the newly raised Saxe-Bearstein Regiment von Schafbok (one battalion) for service with the Beerstein Foreign Legion. Colonel von Schafbock, along with the other unit commanders, will be invested into the Order of the Goblet. All of Beerstein awaits these heroes. The infantry and artillery contingents are now up to full strength. Only one light cavalry unit is required to complete the Foreign Legion. A painting of these brave lads will appear when they arrive for duty!
Posted by Capt Bill at 8:47 PM 3 comments:

(The play-by-email "Charge!" game between Stagonia and Stollen has added a new chapter.) 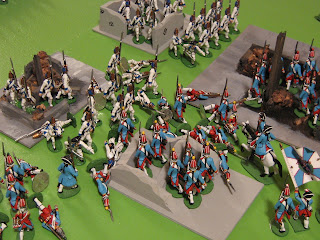 The horrible wounds and suffering of the common soldier are evident in the latest artists' renderings of the current battle between the vile Stagonian invaders and the noble defenders of the Grand Duchy of Stollen.

Those with strong stomachs may wish to click on renderings such as that accompanying this report to see yet more of the terrible havoc wrecked by modern Eighteenth Century firearms.

Much more information (as well as more artist's renderings) is available at the news services of the Grand Duchy.
Posted by Bluebear Jeff at 9:25 PM 1 comment: 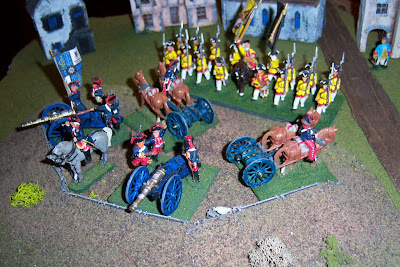 Bree's Battery, Royal Artillery of New Wales, Holy Moroan Kingdon take up field position with the Second Battalion of Regiment Stummel from the Frundsberg Frei Stadt in support. We hope the artist was able to capture These units in their full glory. Several other painting are on display in the Reich Duchy of Beerstein.

Some Eye Candy, anyone?

Greetings!
Some new pictures of troops from the Holy Mormoan Kingdom of New Wales are available for your viewing pleasure at this BLOG.
Below: The Yarra Militia engaging Hostiles 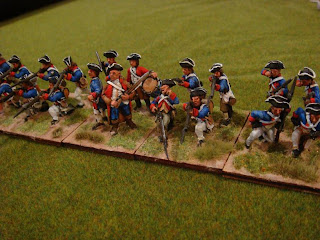 Bestonian army has got a new military uniforms. Our army has given orders to wear a new ,, unity´´ uniforms. For more information please look blog
Posted by Bestland at 12:07 PM 1 comment: