Thanks, I'm back with Firefox 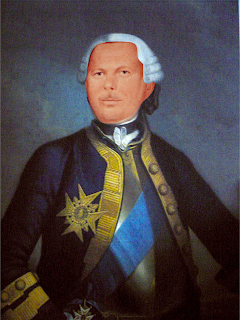 One of three new portraits presented to Reich Duke Wilhelm by Sir David Linienblatt. Please vote to see which image will appear on our new currency. The Reich Duke is very pleased to be back in battery with Firefox. Thanks to everyone for their help!

I have been unable to upload photos to my site for some time. When I try to use the insert image icon it cycles past the select photo box before I can click on it. Does anyone have a suggestion?
Posted by Capt Bill at 5:50 PM 3 comments:


1794 and the French Republic is on the offensive, penetrating into parts of Germany beyond the Rhine. One French force is pursuing an Austrian army as it backs its way into the principality of Frankenberg. Although the Prince Archbishop Klaus VI is loyal to the Emperor there are grumblings that may support the idea of revolution in his tiny fiefdom. Will the forces of order prevail over the Revolutionary chaos sweeping Western Europe? Will liberty, equality and fraternity come first in the land of the wurst? Further frolicking in Frankenberg fighting the French fashion for ferment is about to commence!
Yes, after two years blogging  hiatus a new campaign in the land of Frankenberg begins. You can read more at http://frolicsinfrankenberg.blogspot.co.nz/
Posted by Natholeon at 3:18 PM No comments:

(the 18th C. League of Extraordinary Gentlemen)
in London by the time of King George's War

Well its that time of the year when after the hustle and bustle of Xmas and New Year doings are finally out of the way and I can sit back and reflect on how last year went and what my plans are for this one.

On a personal level 2012 was not one of my best years, but I guess every now and again one must expect a year where everything gets tipped in side out and 2012 did that for me.
As far as wargaming went I think it was a better year, I made a few new friends, reinforced some older ones and finally became a committed blogger.
Of course the Mayan's didnt help, because they resorted to threatening to end the world I had to take time out to pack my remaining armies up and have them ready in case the this world ends and I end up joining you lot in the next, at least I would have had a head start on having an army. But knew they got that wrong when I woke up the day after the world ended and I was still laying in a casket lined with little lead men, quite silly really.

I have finally decided to challenge my reluctance to resume painting figures and that is purely because of the very good friends I have made both over the web and in person regarding the two blogs I run. As some of you are aware I have early parkinson's disease and that has created problems with shaking hands, this frustrated me so much that I eventually swore of painting any more.

However in creating the Vales of Lyndhurst (Vales of Lyndhurst blog) this has awakened the desire for me to get back into big battalions and Charles Grant type rules rules. Speaking of rules Archduke Piccolo sent me a copy of his Horse and Musket rules and I am a convert to them.

For readers of my Vales of Lyndhurst I must apologise for the recent large text postings in regards to events that are occurring in England and Lyndhurst. The reliance on  large text posts is deliberate in that I want to hurry the story along so that I can get it near to the point where County's start mobilising their military units and the wargaming (hobby) aspect can take over from the heavy writing.
I am not a fan of situations where one morning Duke X woke up, had a bad cup of tea which only darkened his already foul mood so he decided to invade bloggerville by midday just because.
I like to cover the why's and where for, and even though its a imagi nation I really wanted the Vales of Lyndhurst to have some slight relevance to reality and some history.

However in another two or 3 postings I will have the storyline up to where I can leave it to just tick over as the Knights and Lords begin their military posturing's. That will allow me to spend less time thinking about the story and the subsequent writing and more on trying to paint a new army.
Because of the painting issues it will take some time to create a reasonable force but my fellow wargaming buddies Ion (Archduke Piccolo) and Paul (where the hell is your blog Paul) have kindly suggested I can borrow some of their units if I need them, this will at least allow me to keep the storyline ticking over.

In regard to where my personal life goes in 2013, well I am hoping for the better. I am due to go back into hospital for surgery in a month or 2 so once that is out of the way I intend to look for a new house and get back into gardening and of course continue wargaming.
I have been looking for a house but it seems that trying to find a house with a wargaming type den in earthquake broken Christchurch is quite difficult, at least finding one that doesn't require me to raise a mortgage the size of the national debt is at least.

I wish to thank all of you for your absolutely great blogs, they have certainly made interesting reading and sparked some new life into a tired old wargamer, in particular I want to thank the readers of both the Rechburg ( The Herzogtum von rRchburg) and the Vales of Lyndhurst  for staying the course with me and to send each and all of you the highest regards and hopes for 2013.
Posted by Unknown at 11:24 AM 3 comments: