My middle daughter has a request-

"As part of my university course I am doing a group presentation about the colour white.  My section of the presentation is the associations of the colour white in war.  I have already come up with the ideas of a white feather for cowardice, white flag for surrender and white bandages.  I was wondering if anybody had any other thoughts?Thanks Anna"

Let's see what you can come up with chap
Posted by tradgardmastare at 7:15 AM 11 comments:

I received some bad news from Archduke Piccolo (Ion Dowman) via The Oddfellows Lounge a week or so ago regarding Barry Taylor of Herzogtum von Rechburg and Vales of Lyndhurst fame,


Unfortunately, it looks as though the Vales of Lyndhurst narrative will never be finished. Its author, Barry Taylor passed away about a fortnight ago. Although Barry and I have been acquainted for five or six years, now, I never knew him all that well, and that only through wargaming. I rather regret that. Even before then his health had been indifferent on and off, and this year opened badly for him. Just when he seemed to be coming right, he was again struck down, but this time the cancer was terminal. Although he thought he might improve enough to receive visitors, as I understand it, he never quite managed it. I'll miss him, and I'll miss his projects. Good-bye, Barry...

I found Barry's enthusiasm for imagineering and story telling compelling and I echo Ion's words, I too will miss his projects, particularly the story telling, and the spirit with which he approached them. 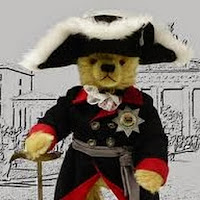 I'm sure he is standing around that 6' x 4' in the sky keeping an eye on us, rest easy Barry.

Awhile ago I posted about the problems of small tinpot states (like mine) when larger armies come near them. This is doubly problematical when (like mine) your main army is off fighting somewhere else (we took French coin and went off to Saxony, problem is the Hanoverians approacheth...)

Anyway, I got interested in recruiting more troops - especially a Militia - and did a quick survey of Kronoskaf and so concocted the following table: 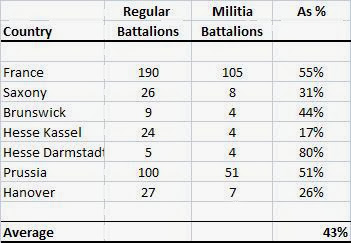 Its not particularly accurate, if they had a number for Garrisons I put them in here. if not I didn't, and I tended to grab the most readily available numbers on the site for any one army, and came up with a number of about 40% of Militia to Line battalions.

But....the lowest ones % wise were States that either took British money to build more line battalions than they would afford naturally (Hanover, Hesse Kassel) or were KO'd early on (Saxony). France and Prussia re probably more indicative of the maxima numbers, c 50%.

At any rate, this gives my tinpot state, with 3 line battalions, a Garde demi battalion, a converged Grenadier battalion and another near-battalion worth of the 3 line battalions' depot troops, a magnificent theoretical total of about 2 Militia battalions.

Another quick scan - Aha! - there are Freikorps, Legions, Volontaires etc - the French model is typically 2-3 squadrons of horse and a battalion of Foot volunteers. Surely any half decent tinpot state could raise its own Freikorps of Gentlemen, Scholars, Romantics, Patriots and Bounders! I decided mine clearly could

And, another quick reading showed that countries like Austria were quite good at grabbing frontiers men, mountain men, hunters etc into light part-time battalions, so surely there is such a battalion I can make from my hunters, foresters, mountain men etc.

So there you have it - the theoretical muster for your Imagi-Nation is about 50% of the Line battalion strength, and at least one FreiKorps and Light Jager/Grenzer/etc unit.

Which gives my tinpot state - well, its over here
Posted by freecloud at 2:45 PM 3 comments:

I saw pictures on the web somewhere of a new range of mid 18th century wargame figures that were catoonish/caricature  with exaggerated noses proportions etc.I can't for the life of me recall who made them I quite fancy painting a few..Can you help?
Thanks
Alan
Posted by tradgardmastare at 12:34 AM 14 comments:

Due to a change of direction and redesign the "Beimbach-Schonau Chronicles" has changed name!

Would somebody please add or edit the listings to reflect this.

We are now known as:

Thank you good sirs!
Posted by Ritter von Krautheim at 3:58 PM No comments: