Just posted on the Defiant Principality blogsite the first one of a series of three AAR reports, reflecting the development of a critical battle from three different points of view, in a chronological sequence leading to the battle climax and aftermath...
This first report is intended to reflect the point of view of the entrenched defending line men (and women), heavily bombed at the battle start while the enemy tide approaches. 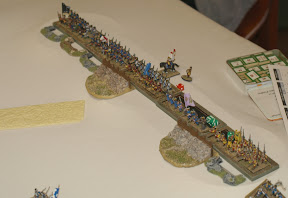 The battle was actually gamed on last weekend using BLB 1st edition (we haven't had the time to read thoroughly enough its 2nd edition) with 15mm miniatures of my own collection. I played the Spanish side and my gaming mate Jordi lead the Catalans, while Herr Rittmeister Krefeld (Stephan) performed as privileged witness, reporter and international adviser to the Catalan side (grrr). Quite a lot of fun, wish we can repeat such events more often!
Posted by Soldadets at 3:03 AM No comments:

Ambush in the Pyrenees AAR

A pretty small, albeit furious battle has taken place on 7th December 1713 in a remote, snowy valley in the Pyrenees. A full battalion of Walloons escapes from anihilation in the last minute, thanks to a momentary loss of control in their ambushing enemy's lines.
If curious, you can read the AAR here.
Cheers,
Lluís
Posted by Soldadets at 12:00 PM 3 comments:

The Grand Duchy of Fennwyck

"The Empire is a large and diverse place full of minor kingdoms, duchies and baronies. For the past 500 years the emperors have maintained power by keeping all those princes, dukes and barons at each other's throats. They are allowed to own small, personal armies. These armies may be called up in an instant's notice to defend the Empire from its vast number of enemies, or used to settle petty grudges and territorial disputes between nobles. War, in the Empire, seems to be the pastime.
Fennwyck is a small Duchy of the fringe of the Empire with big plans. It is a foggy, dismal place, populated by people much the same. The current Grand Duke, Oswald the Bold, tired of being a backwater, has decided to extend the boundaries of Fennwyck. Better government through ruthless expansionism! Oswald has left the command of his armies to General Vanderwalt Klegg, an able tactician of intemperant nature."
Following an earlier post, most of our group is building their armies for Maurice. We have settled on each person taking a barnyard animal as their personal sigil. I have chosen the rooster (or cock) as it matches my Chinese zodiac symbol. Here's the army, their colors and standards:

A fellow 18th C. wargamer who regularly regales us with eye-candy and excellent action reports starts to do 18th C. Horror: cheers! 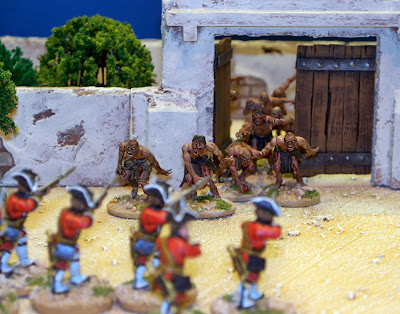 (Furt, if you feel that in my enthusiasm I 'stepped on your shoes' please post a comment here and I'll edit or delete this message as you wish)