http://www.bbc.co.uk/iplayer/console/b015yt86
Go here for an interesting bbc radio 4 programme on Germany- enjoy! It's called "The invention of Germany" and was broadcast on Monday night
Posted by tradgardmastare at 10:54 PM 1 comment: 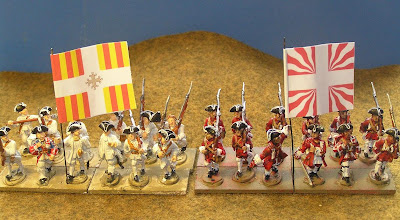 These are my first two Imagi-battalions to be added to my French army, the Corps du Vin (which I have already built, using real wine-producing regional Regiments - Champagne, Touraine, Medoc etc). However the rapid buildup of Perfidious Albion on the continent has necessitated reinforcements.

On the left is the Regiment de Poictesme (see the post below on EvE for the background to this), with the eventual design of the Drapeau d'Ordonnance we discussed shown here. Poictesme is an imaginary Southern French region imagined by the writer James Branch Cavell in his series of books. I imagine the Regiment Poictesme as an ex Milices unit (so it is in white at the moment, no cuff or turnback colours...though they may come in time...)

On the right is the Batalion Valais, a Swiss battalion from the Valais wine region, this was invented thanks to some EvE and TMP people's input - taking the Napoleonic era Batalion Valais and imagining what it would look like in French service in the Seven Years War , complete with a suitable Drapeau from Valais's colours.

I put them up here rather than on my blog, even though unfinished*  as we have been talking about the Poictesme flag on EvE all last week and this just seemed a nicer way of displaying my final design :).

To follow in the Corps du Vin's "Brigade Imaginaire" is the Lorraine imagi-Regiment Mosel and the contingent contributed by my German Imagi-Nation, Saxe-Märchen

(*Apologies - flags unweathered, troops unwashed, un-drybrushed, and even still deflocked as I have just rebased the entire army onto 2" frontage, 1" depth bases)
Posted by freecloud at 6:19 AM 5 comments: 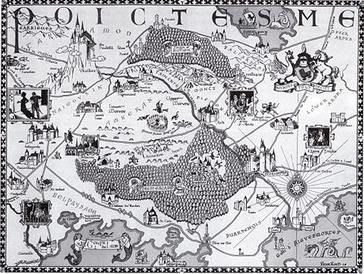 I was looking at potential fictional French areas for an Imaginary regiment for my French 7YW army, and came across the Imagi-Nation Poictesme - Wikipedia:


"Poictesme (pronounced "pwa-tem") is a fictional country or province which forms the setting of the fantasy works of James Branch Cabell, known collectively as The Biography of Manuel. Poictesme is ruled by the Count Dom Manuel. It was the author's intention to situate Poictesme roughly in the south of France. The name suggests the two real French cities of Poitiers (medieval Poictiers) and Angoulême (medieval Angoulesme)"

If anyone knows the Drapeau d'Ordonnance of Poictesme I'd be interested :) 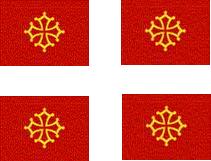 ...and here is teh Drapeau I thought of originally... 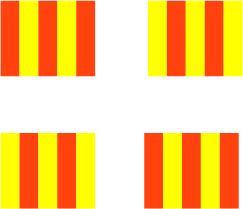 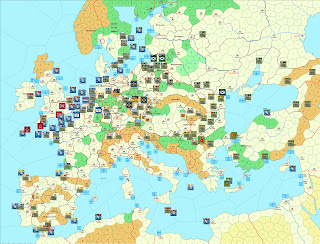 See some details at Österreich Über Alles and The Duchy of Mieczyslaw essentially the Prussian forces have pressed south into Saxe-Bearstein and the Russians into East Prussia and Mieczyslaw.
Posted by MurdocK at 10:42 PM 8 comments:

Re 18th century other races...

I am currently thinking about antiquarian adventurers belonging to a Antiquarian society based in Tradgardland. They will be used in dungeon/wideness adventures.Today I was pondering how other "fantasy races" such as elves,orcs and dwarves would have developed in the 18th century- any thoughts figure suggestions?
best wishes
Alan
Posted by tradgardmastare at 4:09 AM 6 comments: