The Board of Directors would like to report that the Royal Africa Company has established holdings in western, central & southwestern Africa for exploration, colonization and trade. Of course our establishments there will serve as a safe haven for travellers from Europe if assistance is required. A modest fee for merchants and travellers, while the gratuitous grace of our Lord Duke Augustus shall serve for any visiting royalty.


Shares of the Royal Africa Company are available through our exchange in the city of Huack. Adventurers and scientists are welcome to apply for admission into our exploration branch, the Royal Geographical Society as well.
//signed// Baron Paul von Vorbeck, Governor, Royal Africa Co.
Posted by Auston Jeff Butler at 3:45 AM 3 comments:

After first leaving my nitrostats instead of the film ... then being snowed in for three weeks ... Frankszonia finally has visuals again!!!
Hottatrot appears suddenly to take command of the southern army and prepares to meet the rampaging forces of the Colon Coalition ... from another blog entirely ...
:)

Posted by Frankfurter at 8:01 PM 3 comments:

French across the Rhine

latest report are that French revolutionary forces have crossed the Rhine in the Duchy of Pommaine. Their success appears to be due to the use of barges and the lack of preparation by the Pommaine forces. 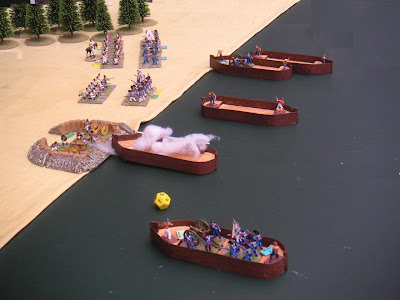 It is reported that Colonel Faffen has killed in the action and that the nobles of Bruckewasser, a neighbouring town are already fleeing in panic.

More details over on the Frundsberg blog
Posted by Fire at Will at 12:34 PM No comments:

Having over my 30YW stuff yesterday, taking those photos and posting them has led me to thinking about what Imagi-Nation belligerents might be called into existence for some sort of campaign? Probably King and Emperor or something similar.

How about the Imperium of Austeria and the Kingdom of Severia?

Of course, I won't be restricting the numbers to mere 400AP DBR - I reckon for 30YW, 500AP gives better balanced armies anyway, particularly for the Swedish whilst still using the Brigade system.

The fact was, I bought my 30YW armies with an entirely different view, with the army sized pre-determined. It works out at around 900AP of Imperialists and 750AP of Swedes according the the DBR accounting system.

Why the difference? My own rules rather favoured the Swedes - especially their horse - whose units were smaller, but rode in a single rank, and charged. Unless the 12-figure Imperialist horse shot very well, the 9-figure Swedish units more often than not would send their opponents flying. The Imperialist numbers made up for this and led to some very interesting battles.

I still have the battle maps of a series of actions fought under my rules (wish I still had that rule set), including the Battle of Coutras as a 'disguised scenario', and Nordlingen. Although these were played long ago, I wonder if there would be enough interest in a narrative with maps and pictures...?
Posted by Archduke Piccolo at 12:10 PM 5 comments:

"Sire, we have had word that a vile attempt to slander your good name has occurred."

"Really? And what are the details of this slander?"

"Some foul person in Frankfort hired thugs to kill an innocent traveler in an inn. Fortunately the plot was discovered . . . but the thugs had been paid in Stagonian gold coins."

"But, sire, they made the mistake of using the coins of the late King Maurice."

"But we have replaced all of those coins with those of our likeness (see photo above -- click for larger image) . . . due to the sad circumstances of his death. Surely given that it was Frankfort suspicion must fall upon the Frankszonians as the true perpetrators of this vile attempt."

(for more information see the account of the Markgraaf of Raubenstadt).

I appeal to all the nobles of the Empire whatever their personal feelings to allow their offspring to support the cause if at all possible.

We have arranged for a very fetching uniform, courtesy of Herr Linienblatt of "Not By Appointment" a reputable costumier (link)

This will be be an an entirely volunteer unit, for gentlemen of independent means who can support their own upkeep, provide their own horse, who are prepared to ensure the security and liberty of the Empire, its Electors, Nobles and Gentry at whatever cost.

New hats for your troops?

Rather off character, thus posted as a comment below.


Over the past few days I have removed close to ten SPAM comments from your various blog posts . . . but I don't always check comments.


So please help me by emailing me whenever you see a SPAM comment.  My email address is . . .  bluebear@uniserve.com . . . and kindly let me know the title of the post that the SPAM comment is on so that I can remove it.