Cross of Sant Jordi to King of Wittenberg

Following a suggestion of Princess Elisenda, the Galatan Corts or Parliament have agreed awarding His Majesty King of Wittenberg (*) the Cross of Sant Jordi d'Alfama, 1st class, in recognition for the warm welcome and assistance to the Princess during her stay in the above mentioned kingdom, as well as for His admirable support attitude toward Knowledge and Science --as witnessed by Her Highness from the sky!!!

[Out of character: given the relative asinchrony of my own Imagi-Nation with respect to Wittenberg's time, I eagerly leave in hands of Allan to decide whether it is King Leopold IV who's awarded, or His August father instead ;) ]
Posted by Soldadets at 2:09 PM No comments:

Thanks to the selfless collaboration of Jeroen72, another proxy fighting played for the Defiant Principality can be now read at our weblog. Despite the lack of game pictures, I honestly believe that Jeroen72's thrilling account allows us to vividly imagine the scene. On my side, I've done my best to illustrate the narration with images the most appropriate I've been able to find.

If curious, you can read the whole AAR at this blog posting.
Posted by Soldadets at 1:29 PM 1 comment: 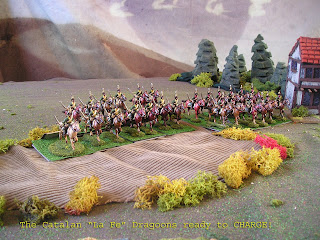 The After Action Report for the Proxy Battle will be up shortly on MurdockS MarauderS.

We has some fun setting up for the game, it was blazing fast! With only two small cavalry forces being in action this should come as no surprise.
Posted by MurdocK at 4:33 PM 1 comment: 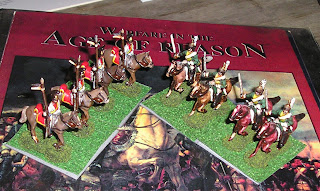 A proxy battle is going to be played out by the team of gamers with MurdockS MarauderS.

We shall see what comes of this cavalry skirmish ...

Read all about it this coming weekend!
Posted by MurdocK at 11:20 AM No comments:

The History of Hesse-Kassoulet's Royal lineage is now complete. Complete as far as good manners will allow and with out letting any skeletons out of the closet. Link

Why are the skeletons still in the closet, hmmph, domestics nowadays.
Posted by Unknown at 6:08 AM 3 comments:

Fronsay Marshal Vile Lars (Vile by name vile by nature) arrived in court today in a rather agitated mood.  Whats this all about?

Due to a thankfully happy event (my gaming mate's wife is about to have their second child), we're in the dilemma of either halting our Imagi-Nation's campaign for several weeks, or seeking a temporary gaming adversary, or seeking EvE's community help by proxy gaming some of our most recent military encounters.

It also happens that our 13th campaign turn, corresponding to the 2nd week of October 1713, has produced up to three different confrontations. All of them involving a small amount of troops, all different to each other: a field battle between two balanced Horse forces, a street fighting between a town's garrison and its revolted population, and the naval interception of a small convoy by a privateer.

If necessary, I could gather the figures due for gaming the second battle, although most scenario items should be improvised somehow. But I have neither Horse forces or ships enough for the other two. Is anyone needing a scenario for training his generals/admirals skills?

Some more info at this blog posting. Detailed scenario data would be worked out for eventual volunteers, of course.
Posted by Soldadets at 1:56 PM 1 comment: